[toc]Gov. Tom Wolf announced that he is authorizing the Pennsylvania Lottery to offer virtual sports games at lottery retailers, including bars and taverns in the state.

Virtual sports are sporting events run by computer software — not real-world games, matches or races — that exist largely as a betting product in Europe but are starting to gain traction in the US. They look and feel much like sports video games, without the ability of users to control the action.

The keystone of a gaming deal?

Wolf’s announcement appears to be the final piece of the puzzle in an overall agreement regarding expanded gaming in the state.

The state House and Senate just sent a gaming package to Wolf that would legalize a variety of new gaming options, including online gambling, online poker, daily fantasy sports and perhaps sports betting among others.

House Republicans had lobbied all year for a rollout of video gaming terminals at bars and taverns around the state. But the final package only included a limited rollout of VGTs at truck stops. That provision didn’t do much to placate a lot of VGT advocates.

But Wolf’s immediate move to add virtual sports betting at bars and taverns that offer lottery would appear to be a carrot to VGT proponents in the House. It gives them a new way to generate gaming revenue and attract customers, short of a full VGT rollout.

That’s all speculation, at this point, but the timing of his announcement just a day after the gaming package cleared the General Assembly certainly points to the above scenario being accurate.

More on PA and virtual sports

According to a press release from the governor’s office, current statutes allow for the conduct of virtual sports via the state lottery.

How does it work? Users can place bets on the outcome of virtual sporting events that are conducted via a software’s algorithm.

It wasn’t immediately clear who would be offering the product in Pennsylvania. But Inspired Entertainment is contracted to run virtual sports via the lottery in Michigan.

Here’s an example of a new product based on virtual football from Inspired, for example: 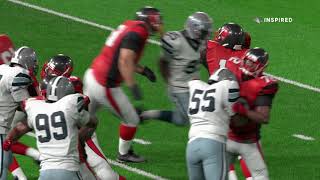 In virtual sports you can bet on the outcome of the virtual event — like a horse race, football game or tennis match.

The advantage of virtual sports over real-world events is that they can take place throughout the day — up to every five to ten minutes.

According to Wolf’s office, the PA Lottery “projects this could add as much as $75 million for senior programs to the Lottery Fund over the next five years.”

“This action allows us to protect our commitment to seniors and stabilize funding for those vital programs, while providing Lottery retailers, including bars and taverns, with a new source of revenue,” Wolf said in a press release.