Despite moving aggressively into sports betting, DraftKings and FanDuel don’t intend to abandon their roots in daily fantasy sports. That’s where their businesses began, and they will remain the two dominant operators for the foreseeable future.

DFS revenue has been mostly flat for some time now, but the sudden attention on sports gaming has folks lining up to capitalize however they can. Some even see enough potential remaining in the DFS market to attack it as the primary target.

Daily Number is the most recent contender, a startup endeavor co-founded by NFL star Richard Sherman.

What is Daily Number?

Daily Number offers a different take on the DFS model. Co-founder Tom McAuley called it a “mass-market” fantasy product that does away with the salary cap and the player-versus-player format.

“Rather than competing against other user-drafted entries in a contest pool,” McAuley explained, “at Daily Number you just play against a target score. The objective is simply to beat that target.”

Customers can essentially choose their own degree of difficulty, and the payout is determined by whether they filled their rosters with elite players like Tom Brady or not-so-elite players like Tom Savage. Theoretically, Daily Number could pay out the entire field or nobody at all in a given week, depending on the target score.

The “number” to beat for NFL Week 1 is 121.69 points, which is hard to put into context. It will be attainable, but the trick is to reach that number with a lower-star lineup. For instance, Drew Brees carries a five-star rating in Week 1, so the return on using him to reach the number is lower.

The product is available exclusively on iOS for now, offering contests in 23 states.

Richard Sherman back in the DFS game

Few NFL players, let alone defenders, have as much recognition in the mainstream as Sherman.

A fan of fantasy sports, the vocal all-pro San Francisco 49ers cornerback has promoted both FanDuel and DRAFT in the past. Interestingly, FanDuel now offers a similar “beat the score” concept, though it retains the salary cap in its implementation.

McAuley brought Sherman aboard as a founding member of the Daily Number team and a key brand ambassador. “Obviously, Richard helps to provide some reach for our product,” he said.

Here’s Sherman in the launch announcement:

Daily Number is a game-changer! I’ve been pitched numerous DFS opportunities, but nothing has even come close to comparing to Daily Number.

I’m extremely excited to be a founding partner and look forward to playing an active role in helping the company grow during this very dynamic time in our industry.

Sherman will promote the product via social media, and he and Daily Number have created a series of video ads featuring nine alter-egos. The first is already out, with “Rambo Shambo” making his on-screen debut. 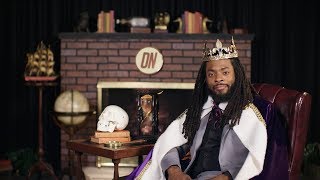 A DFS product from a DFS player

Both McAuley and Sherman play fantasy sports, but McAuley has made a career in sports gaming. His previous company built Realtime Brackets, which has been sponsored by major brands and licensed by CBS Interactive, among others.

As a DFS customer, though, McAuley found the offerings to be a little overweight. “I felt like I didn’t belong,” he said of his first experience. Here’s more:

They have all these prizes listed. It’s a very intense view with all the potential games and acronyms I didn’t understand at the time. Or I’d see a contest with 10,000 people in it I don’t know, that I immediately presume are spending more time on this than I am. So I’m intimidated from the very beginning.

To that end, McAuley crafted Daily Number to eliminate some of the pain points for the regular Joe. He explained his vision:

McAuley espouses a “fundamental belief” that fantasy sports will always be an integral part of our culture, even in the new era of widespread betting. “If anything, I see it growing,” he predicts.

Daily Number is capitalized for launch and the upcoming NFL season, but McAuley says he’s still working with a lean team and a startup mentality. “We’re always fundraising, you know?”