Oulala has announced a deal with Game Interaction Group Ltd (GIG) that will see its daily fantasy sports model introduced to the Italian regulated market.

GIG was founded in 2014, and provides a modular gaming platform which has already been certified in Italy. The platform includes a player management platform, a sportsbook platform and land-based and online affiliate management system.

”Daily Fantasy Sports is taking off in Europe so we’re looking forward to offering something new to our clients, besides what we already offer within our existing platform. We believe that Oulala is the best daily fantasy football platform on the market, offering a unique player experience, as it spices up the love that fans have for the most popular sport in the world.”

”Italy is the next logical destination to offer our DFS platform to. The passionate Italian fans are not yet accustomed to ‘fantacalcio’, as they say, but we believe that this will soon change. We are very pleased to be signing a binding agreement with a prominent partner, Game Interaction Group, who will not only serve as our exclusive partner in Italy, but will also help us spread our operations to other European countries.”

Oulala’s main market differentiator is its use of “Big Data” to offer many more variables which players can use when selecting their team. More than 70 different criteria are available for players to analyze, compared to the 5 to 16 available on competing DFS platforms.

Oulala also offers a “live coaching” feature that allows users to make realtime changes to their fantasy lineups. Oulala contends that this makes “Oulala arguably the most realistic fantasy football game currently on the market.”

The combination of the two features can substantially reduce the role of luck, and increase the skill element in DFS. Oulala states:

“We are the first fantasy football game to be a true skill game.”

Obviously, other DFS operators would take issue with that statement, however.

Oulala is already licensed by the UK Gambling Commission, and a fortnight ago struck another deal with the Cardinal House Group, to expand into the Australasian and Indian subcontinent markets.

The Cardinal House Group is an Australian registered B2B and B2C provider of online social gaming products and real-money gambling platforms. It is in the process of applying for an Australian gaming license.

The deal was brokered by Graham Martin, chairman of Cardinal House Group and former member of Oulala’s board of directors.

”Oulala has proven itself to be a groundbreaker in daily fantasy football in Europe, and its innovative DFS platform has great potential in other markets too.”

Oulala also hopes to be the first DFS licensee when the Malta Gaming Authority launches its new skill gaming licenses.

GIG was awarded its Italian license on September 12, 2015, and launched in the market two days later.

The major Italian operators have just started to get into DFS, but two of the biggest players in the market, Sisal and Lottomatica signed a deal with DFS operator Mondogoal in mid-June.

The biggest gaming company in Italy, SNAI, also entered the market in June with its “Che Bomber” version of DFS.

At the moment the Italian DFS market can be said to be immature, but the Euro 2016 football competition has helped it get off to a strong start. Oulala could be entering the market at a propitious time.

Oulala is French, but France is not yet DFS savvy

Oulala is a French-founded company although based in Malta. France does not yet have any major DFS providers.

Online poker market leader Winamax is the only licensed operator to offer any form of DFS.

In time for the Euro 2016, Winamax launched a trial of its “Le Jeu de l’Entraineur (JDE)” version of DFS, but only for the period of the competition. It has now re-launched DFS (paywall) for the start of the French soccer season.

A recent ruling by the regulator ARJEL, which lists what criteria can be used by DFS players in selecting their teams may open the market, but it is not quite clear whether the Big Data version used by Oualala would be compliant with the criteria. 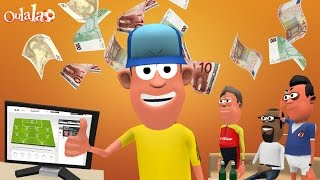