FanDuel has made plenty of news in recent months with its newfound sports betting ambitions. The first FanDuel Sportsbook is already open in New Jersey, and the group has lined up partnerships in more than a dozen states.

It’s easy to forget that FanDuel is still a daily fantasy sports company at heart. And a week from now, DFS players thirsty for NFL action will begin pouring into the virtual lobby.

FanDuel has given its platform a good once-over in preparation, rolling out a number of new features and formats.

Head of Product Nik Bonaddio highlighted a renewed focus on the casual customer as he ran through the changes with Legal Sports Report this week.

Where Bonaddio chose to begin the conversation speaks to FanDuel’s overall game plan.

“When you look at our user base, one of the more consistent complaints we get is that, fundamentally, DFS is too hard.” A lobby that looks like a spreadsheet and contests filled with experienced players can make the experience intimidating for newcomers, he said.

FanDuel designed Guru to help get those players up to speed and nudge them toward decisions that are more strategically sound.

“It’s basically a lineup wizard,” Bonaddio explained. “As you step through a lineup, it makes a recommendation for you.”

Many third-party sites offer similar lineup optimizers, including numberFire itself, but FanDuel is the first major DFS operator to fully integrate the concept. The tool is optional and free to use.

Bonaddio thinks Guru is the keystone update for FanDuel this year, but the efforts to cater to casual players are evident throughout the recent innovations.

“You may have also noticed over the past year,” Bonaddio continued, “that we have made a pretty large investment in free-to-play games.” Free contests in familiar formats are perfect ways to attract casual and season-long players.

Spurred on by the success of Big Game Bingo in February, FanDuel has rolled out two new free games for the upcoming NFL season. And neither of them involve building lineups.

Gridiron Pick’em is more akin to parlay sports betting, frankly. Players pick the winner of Sunday’s games, with a $10,000 weekly prize up for grabs. If nobody picks the slate correctly, the prize rolls over to the following week.

“We wanted to make it super simple,” Bonaddio said. “Pick the winners. There’s no spreads, there’s no totals. We want to always give players a free-to-play game to play — in case they’re not feeling great about the DFS choices that week, or they just want to hang out at FanDuel.”

Survivor is another popular gaming format and arguably the simplest way to speculate on the NFL. Players pick just one team each week, and if that team wins, they advance. Each team can only be selected once per season. It’s a war of attrition, with the field eventually whittled down to a single survivor.

“It sounds a lot easier than it is,” Bonaddio admits. “The best kind of games are the ones that look simple but are hard to master.”

FanDuel Survivor is free to enter with a $250,000 prize pool. The purse is shared if more than one finishes the season “alive.”

Both Pick’em and Survivor are free contests by legal necessity, but don’t be surprised if you see paid-entry versions on the sportsbook in the future.

Customers who haven’t played on FanDuel since last NFL season will notice a few more changes to the interface when they log in this year.

“We rethought our lobby basically from the ground-up,” Bonaddio said. “Again, using the lens of a casual player, we created this Netflix-style Discover tab.”

Similar to what DraftKings Sportsbook is doing, FanDuel presents users with a customized landing page displaying contests tailored to their playing habits and experience.

“We really want people to know that this isn’t just everyone’s lobby,” Bonaddio said. “This is your lobby, and we’re glad you’re back. It sounds cheesy, but it really is meaningful for us.”

The app will interact with FanDuel Sportsbook in the future, too, using betting habits to populate the users’ homepage.

The lobby also includes a new Research tab, another tool to help recreational players who may not know where to source data. For the in-game sweats, users will finally be able to see full box scores and track players not in their lineups, too. 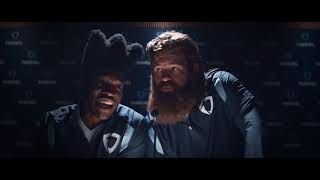 Last but not least, FanDuel also removed the kicker position from its lineup formula, doing the world of fantasy football a solid.